'The screeching drill, the burnt flesh - my dental nightmare'

Eight years ago, Natalia Guerrero was persuaded to have veneers on her front teeth, and then crowns - even though they had been fine as they were. It was the start of a painful dental nightmare that cost a small fortune. And it set her thinking about the millions of people who desperately need dental care but cannot afford it.
It was a treatment I didn't need and I didn't really want. A treatment that left me in agony. A treatment that had to be re-done, over and over again costing thousands of dollars, hundreds of sleepless nights and countless hours of unbearable pain.
I remember the screeching of the drill, the smell of burnt flesh mixed with the sickening scent of blood, my blood. I remember the sympathetic face of the dental assistant who held the suction hose as the dentist juggled inside my anaesthetised mouth.
And even more painful is the memory of taking advantage of a 10-minute break to look at myself in the mirror.
Behind my inflamed face I could see that my six front teeth were suddenly gone. Instead, I had tiny vampire-like cones. I was numb with shock - shock that I had been so tremendously stupid.

This was just the last of a chain of unnecessary procedures, disguised by my dentist as essential treatment for "badly worn" teeth. First he had attached veneers to six front teeth. Then, when these kept breaking, he suggested crowns - which he described as similar but more resistant. Stupidly, I hadn't asked enough questions, and hadn't realised my natural teeth would now be reduced to Dracula stumps.
But not only was the procedure unnecessary (all I needed was a mouth guard to stop me grinding my teeth in my sleep) it turned out my dentist wasn't up to the job.

Listen to Putting your money where your mouth is, Natalia Guerrero's investigation of the relationship between cavities and cash
Or browse other programmes in the BBC World Service's Money and Power series

Over the last eight years I have repeatedly needed surgery to repair my gums. I've had to have all my crowns replaced twice - and those on my upper front teeth three times.
If you haven't had to undergo this, you won't know that it is unimaginably hard to break a porcelain tooth - it is an arm-wrestle between the dentist and the crown inside your mouth. You just lie there. Humble. Silent. Waiting for the hours to pass.

Also, anaesthesia has a shorter effect on my body than on most other people, so I have to have repeated injections - and in between I experience intervals of pain.
The pain continues long after leaving the dentist's chair, inside and outside my mouth. I've had to endure persistent aches in my inner ears, jaw, eye sockets and neck, and intense headaches that have lasted for up to two months.
And let's not talk about how much I have paid to try to fix the whole mess.
You might think I have been unlucky, but in a way I have been tremendously lucky. At least I was able to afford the treatment. Most people would like to improve their teeth - either to heal pain or to look better - but have no way of paying for it.

Almost everyone knows a friend or relation who needs dental work. When someone receives a windfall or an inheritance, this is one of the things it's most likely to get spent on.
"You think twice before laughing because you'll feel ashamed," says one of my aunts in Colombia. Bad dentistry she was subjected to in Spain led to the loss of three upper back teeth, so she now wears a visible prosthesis. The bill for implants would amount to three or four months' pay cheques.
"A mouth without teeth is like a garden without flowers," was the metaphor a woman used to let my uncle Edgar know that she wasn't interested in dating him any more, because of his missing teeth.
Edgar is quite a character, a big smoker, and a party animal. His problems started when he ignored a decayed tooth and the tooth next door became infected. Eventually he had only three left.
Being kind of a hippie, he had no problem in letting his beard grow very long to hide his mouth, but the day he finally got a full set of dentures, he went to the hairdresser and then sent a bunch of sweetly smiling selfies to the family Whatsapp group. He was triumphant - whole again at almost 60.

It wasn't just the cost that made him put off seeing a dentist. He says his generation is genuinely afraid of getting treatment. As a child, my uncle Oscar was tied to the dentist's chair, Edgar says, and he just sat there and screamed.

Across the world, oral health is a powerful indicator of social inequality.
Bad teeth can bring not only tormenting pain, but the loss of job opportunities, ostracisation, and disease.
The cost of dental care is beyond the reach of many. In the US in 2016, about 74 million people - nearly a quarter of the population - were not covered for dental care by insurance or public health programmes.
And even those who were covered often had to pay part or all of the bill for any treatment needed. An extraction can cost between $200 and $600 depending on where it is carried out and whether anaesthesia is used. The price of a crown ranges from $1,000 to $2,000.

So the country that is the home of the Hollywood smile and sets a global standard in dental perfection, a country where people spend more than $1bn on teeth whitening products every year, is also one where millions worry about how to treat a toothache or an infection.
These less well-off Americans rely on free clinics and charities, which have a tendency to remove teeth rather than trying to repair them.
Survey data published in 2015 by the National Center for Health Statistics revealed that one in five people aged 65 and over have no teeth. None. And in the black population the figure is nearly one in three.
"Every year we come to Wise, Virginia, and we extract 4,000 teeth, and the next year is the same," says 82-year-old Stan Brock, founder of Remote Area Medical (RAM), an organisation that provides free medical services to those who would otherwise have no access to them.

Since 1985, RAM has treated more than 740,000 people worldwide, thanks to the help of more than 120,000 volunteers.
At a rural airport at another location in Virginia I saw hundreds of people queuing for treatment with a doctor, a dentist or an ophthalmologist. Some arrived at dawn they were so desperate not to miss out.

Watch: Tootheless in Virginia
In the US a basic dental examination costs an average of $275. In the UK, the National Health Service (NHS) charges $24 (£19) - less than a 10th as much.
But even the British rates are too high for many people.
Surveys suggest that one in five patients have delayed treatment for financial reasons. Which is one reason why RAM wants to start operating in the UK too.
"If I can get an invitation from the government, we'll see thousands of people just like we do in [the US], free of charge, high-quality care," says Brock, himself a British national. "I hear that Wales is in dire straits."

The US and UK are not special cases. In many countries - developed and underdeveloped - dental care appears today to be a luxury. A healthy smile depends on a healthy bank balance. 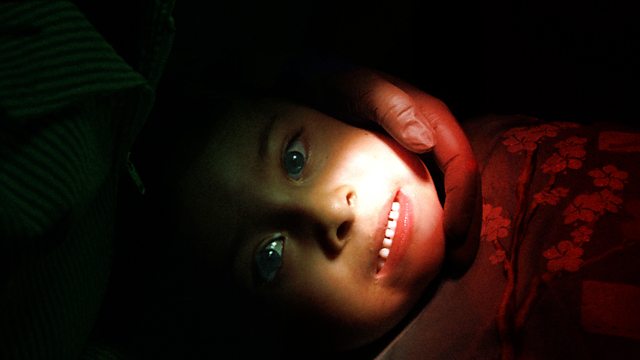 Watch: Toothless in Mexico
Sometimes when I close my eyes, I remember the glittering smile I once had. I remember how small, square and exceptionally strong my teeth were. I miss grabbing an apple from a tree and biting it. It's been eight years since I was able to do that. Now it hurts when I bite, both physically and emotionally, because it reminds me of my big mistake.
When I look at Carolina, my identical twin sister, I sometimes experience a secret sorrow. She has retained her perfect teeth, as healthy as mine were before they were filed away. She notices my glance - but she tells me that my new teeth are lovely, that they are like an actress's.
"A good dentist never takes out healthy teeth, he knows they will never grow again," a dentist once told me in rural Colombia.
She was right.
Natalia Guerrero is a Colombian journalist based in New York
Posted by Natalia Guerrero at 12:30 AM 26 comments: